Skip to main content
To provide you with the best experience, Karlamuiza Country Hotel uses its own and third-party cookies on its website for technical, analytical and marketing purposes. By continuing to browse our site, you are agreeing to our use of cookies. Please consult our Cookie Notice for more information.

Beautiful surroundings of the Amata river

In the 18th-century landscape, gardening traditions were brought from England to the Russian Empire’s provinces in the Baltics; the English style became especially popular during the reign of Catherine II. The central concept of romantic landscape parks is to avoid crippling the beauty of nature. Hiking trails were winding naturally along rivers and through forests or ravines as if they were there for hundreds of years. Fallen trees were to stay and gradually become covered in moss. Even if landscaping activities were performed, such actions were designed to retain the wild beauty of nature. Creation of beautiful observation points and romantic spots was allowed, but the landscape park was meant to highlight the uniqueness and variety of species.

Creation of the landscape park at Kārļamuiža (Manor Karlsruhe) 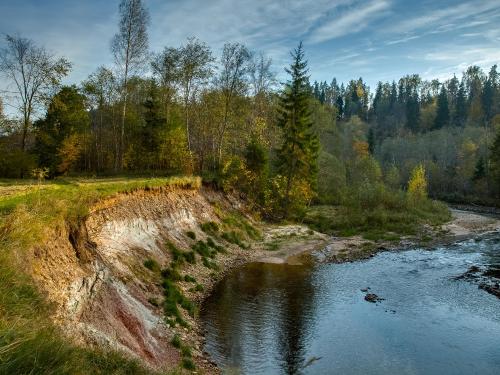 Beautiful surroundings of the vivid Amata river bank became a popular destination at the end of the 18th century. Nature provided the unique conditions on the banks of the river Amata, near Kārļamuiža, to create a beautiful Landscape Park. The area is blessed with impressive sandstone and dolomite cliffs, breath-taking views s, bubbling streams, a choir of various birds and primaeval ravines.

The area is so much in line with the Enlightenment-era notion of parks or gardens, and at the end of the 18th century, an open planning Landscape Park was created in Kārļamuiža according to the fashion requirements of its time.

The owners of the manor carefully improved the surroundings: hiking trails were created along the rocky cliffs of the nearby Amata, and an artificial waterfall and several romantic rest spots were built. Landscape Park is an expression of the best taste and understanding of beauty from the era.

The Landscape Park included the most massive rock formations of the Devonian period and cliffs of the ancient valley; most of the plants and trails remain intact today. It is possible to walk on the old park trails and see the impressive cliffs and rock formations along the Amata.