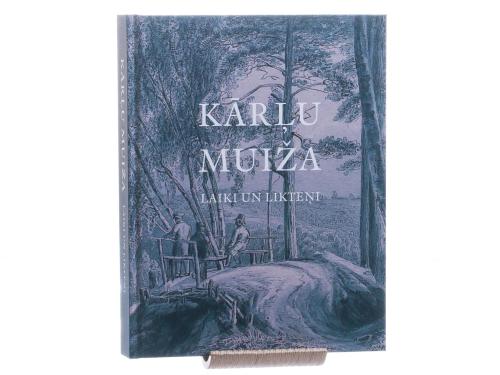 ‘’KĀRĻU MUIŽA. Eras and Fates’’
The history of the Kārļu muiža (in Latvian)

Beautiful surroundings with a distinct terrain, steep sandstone riverbanks, wooded knolls and flower-rich lowlands formed an expressive background for the manor buildings while at the same time highlighting special conditions. The desire and ability of the former owner to unite practical needs with aesthetic pleasure allowed Kārļumuiža to become a well-considered, beautiful and tasteful set of buildings and parks, skillfully placed in the natural landscape, charming not only the inhabitants of the manor but also travellers from the near vicinity and further afield.
This book offers readers a story of the fates of Kārļumuiža and its people over three centuries: fates formed by their wishes and desires, fates dependent on the ruling powers’ political interests and economic cataclysms, but most often fates formed by the interaction of various circumstances. The owners’ economic activities, political careers, and successes and failures furthered the growth, stagnation, or decline of the manor.

Research was carried out using documents from the Latvian State Historical Archives, the Cambridgeshire Archives and the Secret State Archives Prussian Cultural Heritage Foundation; manuscripts from the Rare Books and Manuscripts departments of the University of Latvia Academic Library and the National Library of Latvia; objects from the Cēsis History and Art Museum, as well as information published in literature, periodicals and the internet.